One of the ways Hearthstone is enticing new and returning players back onto the board is the ability to choose a new, pre-made, meta-friendly deck upon your first login. So far, these decks are pretty easy to play for returning players and allows them to ease back into this dumpster fire the game we all know and love.

But before we dive into the top 2 best hearthstone decks for returning players, let’s dive into a couple of key concepts that were introduced in 2020. If you’re like me and your last playthrough was Descent of Dragons, you’re going to want to go through this first. I didn’t include keywords because, honestly, as a returning player, picking up these keywords should be no biggie:

The introduction of a 10th class in Hearthstone had been nothing more than gossip and fan-building over at online forums since Naxxramas, and finally, in the Ashes of Outland expansion released in April of 2020, we got Demon Hunter.

Represented by either Illidan Stormrage or Aranna Starseeker, the Demon Hunter class is built for aggro gameplay: his Hero Power Demon Claws gives your hero +1 attack for this turn and is augmented by a whole slew of cards that provide attack buffs and powerful weapons. A new class-specific keyword, Outcast, was also introduced which provides cards with added effects when they’re played from either the left-most or right-most position in your hand.

Another idea that’s been toyed around with since the early days of Hearthstone, dual-class cards finally came to being with the release of Scholomance Academy in August of 2020. Dual-class cards are exactly what they say on the tin: they’re cards that can be equipped in decks for two different classes which combines themes and mechanics from both classes they represent.

Now that those are out of the way, let’s jump right into what I think are the two best hearthstone decks for returning players: 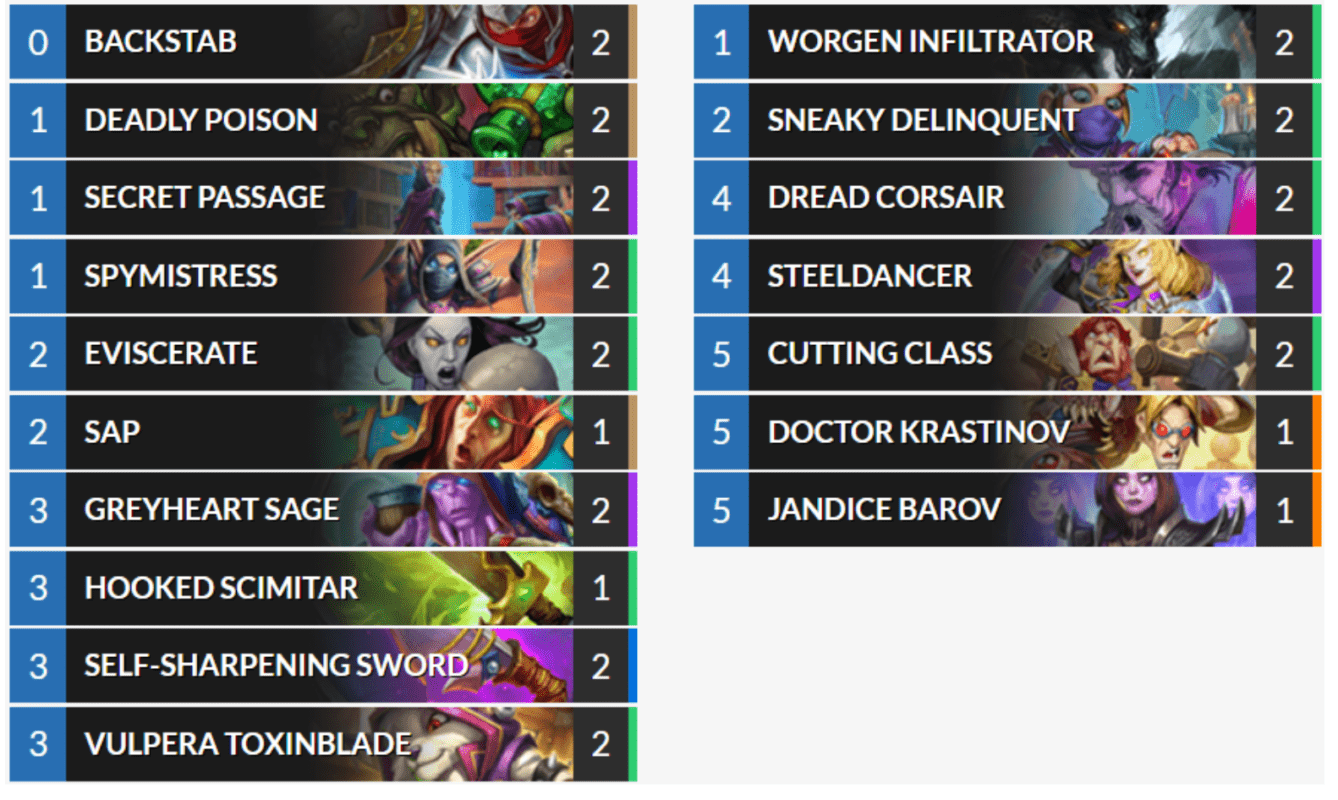 As mentioned, new and returning players are given the chance to pick out a pre-made deck upon their first login, usually accompanied by 2 Legendaries. With the Rogue class, however, you’re given Jandice Barov and Doctor Krastinov, 2 very powerful cards that also happen to be dual-class: Jandice Barov is a Mage-Rogue card, while Doctor Krastinov is a Warrior-Rogue card. In terms of value, there’s not much that beats this as technically you’re getting 2 Legendaries for 3 classes.

In terms of gameplay, Looking Sharp is very much classic aggro weapons Rogue with an emphasis on weapons, weapon buffs, and controlling the tempo with Stealthed minions. My favorite cards for this deck, however, are the Self-sharpening Sword and Steeldancer, with the latter being another dual-class Warrior-Rogue card.

If you manage to get Self-sharpening Sword early and manage to hold off your opponent with Dread Corsair long enough to get Doctor Krasinov into play, your Hero damage can definitely snowball into an easy mid-game one-hit lethal. But even without it (or if your opponent pulls out Acidic Swamp Oooze or Kobold Stickyfinger), you can still apply heavy damage with your other weapons thanks to Deadly Poison and Vulpera Toxinblade. Of course, if they pull out Kobold Stickyfinger while you have a weapon with 10+ damage, you’re pretty much wrecked it can be problematic especially if you don’t have taunt minions to save you. But what are the chances of RNG being that bad?! 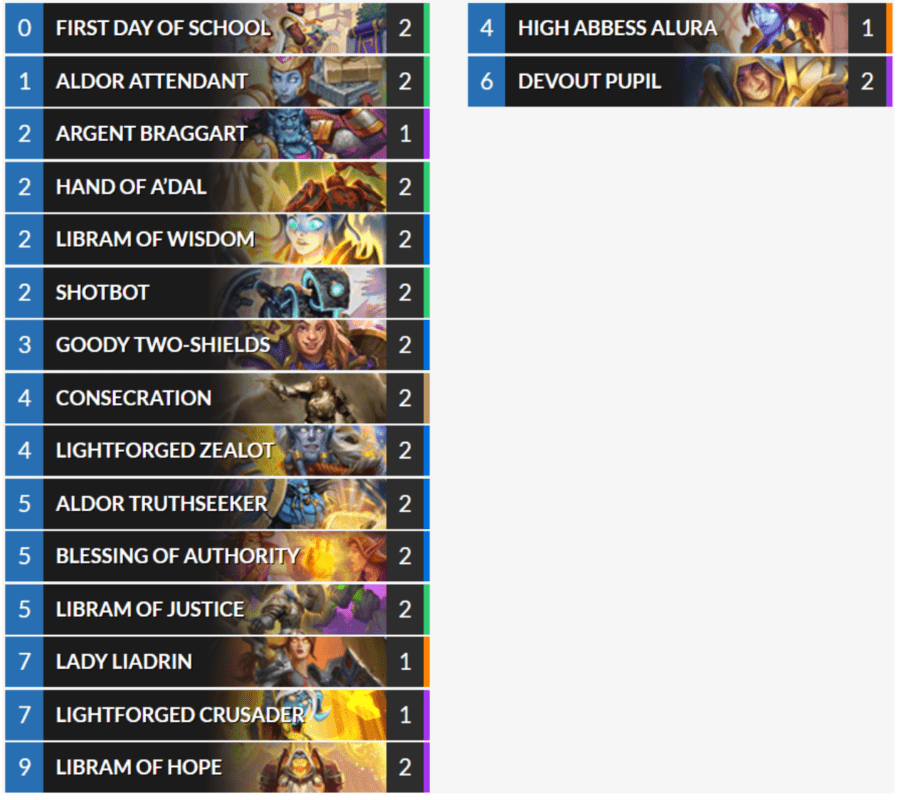 Your second-best deck if you’re a returning player would have to be Paladin’s Liadrin’s Librams deck for two reasons: it gives you 2 Legendaries of amazing play value, and because it’s the perfect counter for the current meta’s infestation of Spell Mage and low-budget Demon Hunter decks.

Liadrin’s Libram’s legendaries aren’t as flexible as Rogue’s; High Abbess Alura is a dual-class Priest-Paladin leg, but as of the moment, it’s only really seeing play in Paladin decks. Meanwhile, Lady Liadrin is a Paladin-specific card. However, if you’re bent on hitting Legend with Paladin, Libram is your best choice.

Playing Liadrin’s Libram was fun because it hearkens back to Paladin’s original theme of fielding small-time minions and buffing the ever-loving stuff out of them. Aldor Attendant and Libram of Wisdom are great establishing board presence if you draw them early, while Libram of Justice can work as a board clear if you pair it with Consecration.

This is very much a mid-to-late game deck, and you should have enough minion buffs to survive that long even against the most aggro players out there. However, one miss-step or if your opponent has a pretty OP removal card, then all that hard work is for naught. But, again, RNG can’t be that terrible, right? Right?!

Why Am I Returning to Hearthstone

A bit of background: I stopped playing Hearthstone back in December 2019. Prior to that, I had been playing the game since Goblins vs Gnomes and even competed in some local tourneys. I’m definitely nowhere near an e-sports athlete level, but I’ve been known to hit legend a couple of times.

That being said, this also isn’t the first time I quit then came back: after the release of Mean Streets of Gadgetzan, I didn’t pick up the game until Knights of the Frozen Throne. I’m not going to go into why I quit last year, mostly because you and I probably have the same reasons (bad RNG, Activision’s questionable conduct, the release of Legends of Runeterra etc.) and I don’t want to bore you with the details. At the end of the day, I guess quitting Hearthstone a few months before Covid was a good thing, seeing as I didn’t need anymore negativity in my life while I was under quarantine.

But after prodding from some friends and reading up on the new developments since Descent of Dragons, I told myself: sure, why not, let’s play a couple of games. And honestly, a lot of my concerns about Hearthstone’s gameplay has changed, some for the better, some for the worse, and while a lot of the major problems I have with Hearthstone have yet to be fixed, the new features do make up for it and make me want to play the game a little more seriously again.

Just remember that if you’re going to pick up the game again, make sure to check out all the buffs, nerfs, card lists, and current meta discussions online. For a game like Hearthstone, taking a year off is a pretty big deal, especially since 2020 introduced a whole bunch of game-changers that have really made Hearthstone interesting again.